(AP) — A Jeep buried in sand in Massachusetts 40 years ago finally was dug out. It was stored in a garage long ago buried by shifting sand dunes. Munsnuff says the family was unable to remove the Jeep or dismantle the now-collapsed garage all these years because of environmental regulations around the dunes. Munsnuff says he snagged a few souvenirs from the barely recognizable wreckage, including the Jeep’s hubcaps and door handles. The Jeep once was painted white with a green interior.

(Steve Heaslip/The Cape Cod Times via AP) Steve HeaslipAssociated PressTRURO — A Jeep buried in sand in Massachusetts 40 years ago has finally been dug out. It had been stored in a garage that was long ago buried by shifting sand dunes. John Musnuff looks through the rubble of the old family Jeep after it was pulled out of the collapsed storage shed Friday, Feb. 24, 2017, in Truro, Mass. Work crews early Friday pulled out the rusted remnants of what John Munsnuff says was once his family’s “beach buggy” at the home they’ve long owned near Ballston Beach in Cape Cod. Munsnuff says he snagged a few souvenirs from the barely recognizable wreckage, including the Jeep’s hub caps and door handles. 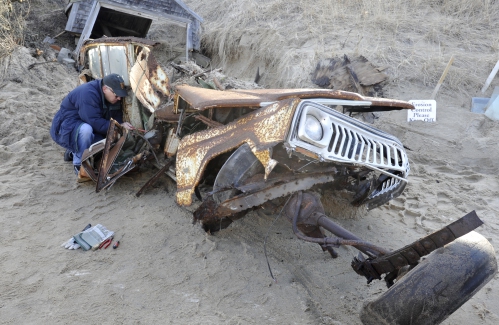 Rumormill What’s holding back the Jeep Grand Wagoneer? If you’re in this area in the summer, seeing more than a dozen Grand Wagoneers a day is assured — the model is practically the Cape’s automotive mascot. Car Reviews 2017 Jeep Grand Cherokee Trailhawk review: Luxury yacht for all seasons There is no shortage of Jeep Grand Cherokee flavors to choose from — except for one with woody siding — and the Trailhawk is the one aimed at off-roadability. How did a Wagoneer look after spending more than 40 years under the briny sand? We’ve found the most complete videographic record of the Jeep’s removal, courtesy of the same Cape Cod Times, which is far longer than the actual removal process was.