The California Highway Patrol has discovered a Jeep Cherokee buried under 20 feet of snow on the side of a road outside of Truckee. JEEP BURIED IN SAND DUNE FOR 40 YEARS FINALLY UNEARTHEDJust don’t head back to retrieve it anytime soon. Apparently one of them seriously damaged the truck as it was carving a canyon into the snow, which led to its discovery. The area sees some of the highest snowfall in the United States and has been hit particularly hard this year, with walls of snow bordering many of its major roads. Since it’s not blocking the road, and sits under layers of stratified snow and ice, the police are leaving it up to Mother Nature to thaw it out.

Jeep found underneath 20 feet of snow in California 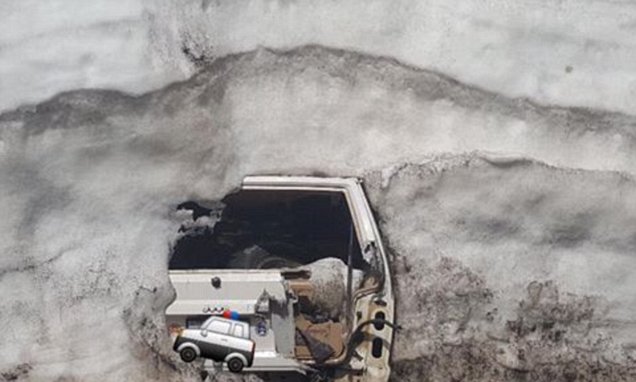 CHP find Jeep buried under 20 feet of snow in Donner Pass. That is until last Thursday, March 9, when officers spotted the Jeep — buried under 20 feet of snow. The Jeep, Mann says, was apparently hit by a snowblower as it was carving a canyon into the snow. (Courtesy: CHP-Truckee)Early in the winter, California Highway Patrol spokesperson Pete Mann says they received complaints about a white Jeep Cherokee parked off of Soda Springs Road in Donner Pass. The Jeep, though, was parked on private property, so officers weren’t able to do anything about it, Mann says.