The website JL Wrangler Forums has always done a fantastic job at keeping us up to date about the upcoming 2018 Wrangler, as well as the new pickup heading Jeep’s way. Now JL Wrangler Forums has come up with a rendering of what the pickup could look, like based off the information available to the public…and whatever other information they might have. As you can see in the images below, the pickup will closely resemble the new Wrangler, with a nearly identical grill, doors, frontal roof line—maybe even the interior. The new pickup could have upwards of six different engine options: two versions of the turbocharged 2.0-liter four-cylinder, two versions of the 3.6-liter Pentastar V-6, and two possible diesel engines (2.2-liter and 3.0-liter versions). The real difference is the total length, as well as…the bed.

Is this 2JZ-GTE-swapped Jeep Wrangler worth $20,000? According to the listing, the only things wrong are missing heater lines, non-functional air-conditioning, and a gas gauge that needs to be wired up. The seller claims a stock ECU and fuel system are the only things keeping this Jeep from putting down truly insane power figures. But even if that’s the case, the bones are there for creating the world’s unlikeliest drift champion. Considering the amount of cash that likely went into its creation, we’d have to say probably, but that’s for the eventual buyer to decide. 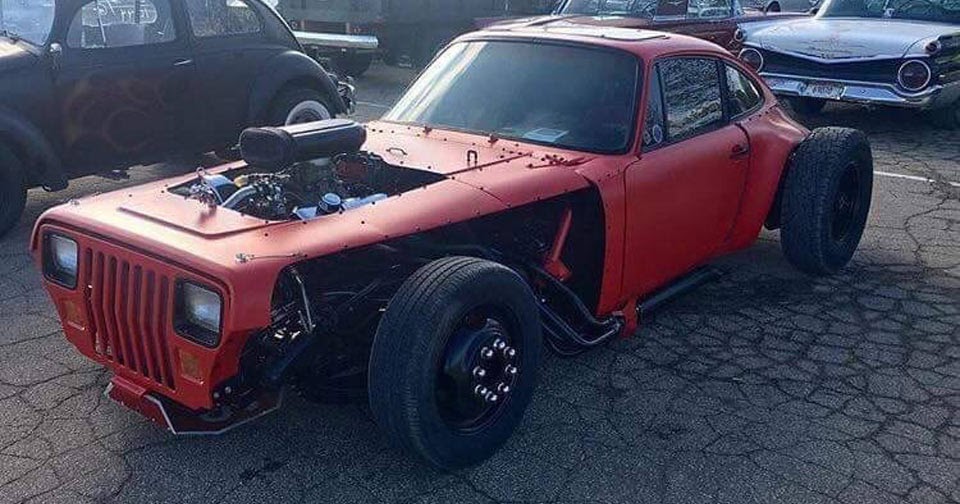 In February, we were left dumbfounded when we stumbled upon a Porsche 911 rat rod in Monaco and despite our hopes we’d never have to see another one, we’ve found an even more horrible or cool – depending on your point of view. .It’s not known if a tuning company is behind the project or if it is a simple and particularly wild backyard creation but the finished product is truly wild.The front is made up of the grille and headlights of a Jeep Wrangler and directly behind is a stonking great engine, inevitably a V8. The cabin then appears to be made up of a 1990’s 911 while the front and rear wheels shoot out from beneath the bodywork like an open-wheeled race car.Rocking up to a local car event in this thing would certainly cause a scene, but driving it on a regular basis would surely be a living hell.